A downloadable game for Windows

Take SyRec the plucky little robot and navigate puzzles of logic, timing and physics to advance to the next level.

It should save your progress, but this is my first time implementing game saving in Unity so please do let me know if there are any problems.

Down - activate switch or terminal

After my last project snowballed into something huge, I wanted to do a project of limited scope that I could finish in a short time frame. This took me about two weeks of solid work (excluding a break in the middle working on something else).

To keep my scope limited I set the following constraints:

I made a small concession in early development as I realised there was one more thing I needed:

I chose this specific project in this scope because I found the 16x16 robot tileset by 0x72 and thought it had a ton of potential, and I was interested in testing myself with building a puzzle game for a change.

There are a lot of new things I did for this project.

There is a possible issue on level 4 where one of the buttons very rarely gets out of sync with the door it activates (with the door being closed when the button is down instead of open). I've seen this a couple of times but have not been able to replicate it and can't think of any code reason that it should happen. If this happens to you please let me know the circumstances so I can hunt the bug! Remember you can restart the level with "r". 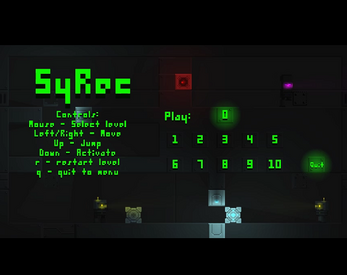